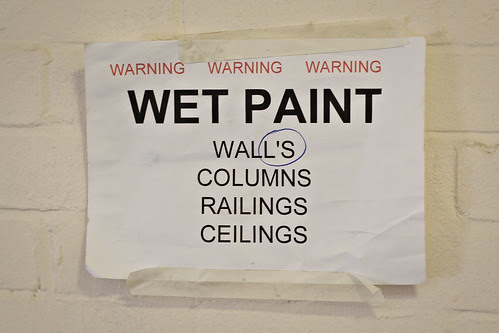 You can spot them because they often carry two sheets of sticky labels. One is blank, to cover up spurious apostrophes that they find, such as at the greengrocer's stall at the market. The other contains apostrophes which are inserted where they are missing, often at banks: Barclay's, Lloyd's TSB, and supermarkets: Tesco's, Morrison's.

However the world of guerilla pedants is a divided one. Although they all share the same standard when it comes to English as she is spoke and written, they lack a similar benchmark when it comes to communities. The Pedant's Society was torn apart (soon after their triumphant Millenium Party held on the 31 December 2000) by argument and a separate Pedants' Society was formed (both are correct).

The guerilla pedants, although sharing a common need to put the written word to rights, are not united in the tactics. There are those who think that if people only ever see correct English they will absorb it and only produce it themselves. So they carefully print the word "fewer" in the correct font and colour and stick it on the sign at the supermarket that says "10 items or less". Others think that people should know just how bad it can get, and cross out "less" and scrawl "fewer" in black marker, so that you know what's right.

Photo's by neonbubble and Will McGree.

September 22, 2012
When I got a Playbook I wanted to use it to listen to BBC iPlayer while doing the washing up. So I made a cardboard tablet stand out of the cardboard you get with new shirts. Recently I came across a video by Jude Pullen showing how to make a right angle joint with card and it inspired me to share what I'd done, via a PDF rather than a video though. The PDF below is for a Playbook but I would have thought that any seven inch tablet, like the Kindle Fire or the Google Nexus 7 would fit. If in the unlikely event they are more chunky than the Playbook, you can just cut the slot wider. It's probably more sturdy if you make it out of a corrugated cardboard. Seven inch tablet stand
Post a comment
Read more