October 04, 2010
When I was at the University of York I had a show on University Radio York (aka URY). (This fact has earned me some cool points with my children.) I had two hours on a Saturday morning to fill. I found it quite hard to fill the show. If you wonder why, then try and think what it must be like to find 30 tracks you like, when you're only 20, and in the days before the Internet. One of the tricks I'd do was to find an album with a song I knew on it, play that song, and pick another half decent track on the same album - only one album to lug around then. 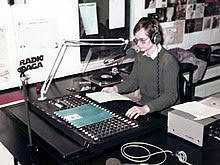 Anyway, the reason I'm posting this is because out of curiosity at the weekend I thought I'd see if it was mentioned on wikipedia, and it was. Not only that, the picture above could almost be me. It was taken around the time I was there, I wore a cool jumper with shoulder pads like that (except mine had a zip down the front). The only way I could convince my children it wasn't me was by pointing out I don't like glasses with brown lenses. Spooky.