Neural implants - a gadget from the future 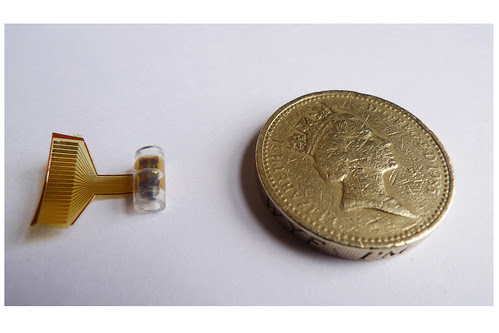 A gadget magazine from the future fell through a wormhole in time and it made very interesting reading. Here's an article from it about neural implants:

Neural implants are the latest essential gadget, but how do they work? Although they aren't the sort of thing you can get a demo of, we talked to a few of the early adopters to find out how they got on with them. The basic setup comes in two parts. The first is an implant which goes under the skull behind the ear in the motor section of the brain. The second goes on the optic nerve as it comes out of the back of the eye.

When you're first given them you don't notice any difference, apart from the after effects of the operation itself. This is the "discovery phase", when you're trying to find out which physical movements trigger the neurons that the motor implant has been attached to. The way you know you've found out is that you get a bright flash in your vision as the optic implant triggers. One person we talked to found out that what triggered their implant was reaching down with their right hand to scratch the back of their left ankle. So it's not a single movement, but a combination that triggers it, and it takes a while to find out what that combination is. Once you've discovered it, you don't actually have to do the movement, but to think about beginning to do it. Once that's been mastered finer control of the implant's functions can be achieved, rather than just triggering.

The second phase it to calibrate the optic implant. Although it's hooked into a number of optic nerves, it's not easy during the operation to determine which ones correspond to parts of the eye which are next to each other, so you have to teach that to the implants. On head-up displays it's usual to put the information around the edge of the screen, but that wouldn't be possible with the eyes. That's because the nerve density away from the centre of the eye is quite low, so we can only actually see clearly in the very centre of the field of vision. The reason we don't notice this is that we are able to flick our eyes around very quickly and look wherever we want. This is mimicked with the optical implant by it only being triggered as the eyes look into the "corners" of the field of view, such as top right.

Some people choose to have something displayed at all times, such as the ambient temperature, or their favourite stock prices, others turn them off until they choose them, using the motor implant. One of the first practical, as opposed to merely recreational uses has been hooking them up to a third implant in the bloodstream. Diabetics can now see their blood sugar levels at all times, and also turn on their insulin pumps. Although the electronic pancreas has been around a while the extra level of control is useful because an electronic pancreas doesn't know that you're about to go for a run, so you will burn up any excess blood sugar quite soon.

Other accessories needn't involve internal implants, as well as being more easily upgraded. So the internet/phone accessory is available as a number of items of jewellery.
Photo by Ars Electronica.