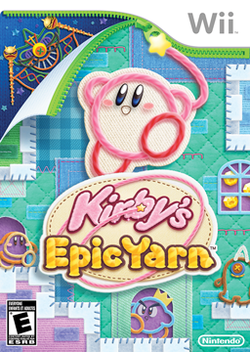 We borrowed Kirby's Epic Yarn for Wii over half-term. It's a delightfully inventive game and I'd recommend it for children of all ages. It's quite forgiving, but that doesn't make it easy. One of the things that struck me was the variety of music on the soundtrack.

Before I cover that though, some thoughts on computer games music generally. Because gaming doesn't occupy a high place in popular culture compared with its turnover, and because it's mostly background, I think it doesn't generally get thought about. Recently, though, the Royal Philharmonic Orchestra played a concert to mark 25 years of Legend of Zelda.

Mostly it seems like it's pretty generic stuff, see Exhibit A - the music to Da Blob. However even the music on that is cleverer than it appears as the melody only plays while you're painting, but cuts in and out at the right moments.


The World of Goo music is quite distinctive and I think it sounds like a film soundtrack. You can even download it.


Back to Kirby - someone's collected all the tracks up. I particularly like the sparse piano track on lava landing.

September 22, 2012
When I got a Playbook I wanted to use it to listen to BBC iPlayer while doing the washing up. So I made a cardboard tablet stand out of the cardboard you get with new shirts.

The PDF below is for a Playbook but I would have thought that any seven inch tablet, like the Kindle Fire or the Google Nexus 7 would fit. If in the unlikely event they are more chunky than the Playbook, you can just cut the slot wider. It's probably more sturdy if you make it out of a corrugated cardboard.
Seven inch tablet stand

December 23, 2019
Back in 1999 it mostly cost money to run a blog (from what I can remember). You had to sort out your own hosting. Then Dave Winer made on offer on his blogging platform editthispage.com for a 60 day free trial, so I was away. So what was my very first post? What words did I choose to post for all on the internet to see?
23 December 1999 I'm stil trying to decide what to do with this. Click on the skull to add your suggestion. Oh, that's not very good is it. A typo in the second word too. The URL was morrissfamily.editthispage.com. (I think. Everything I say could be unreliable, because it was a while ago.) I also created an FAQ page that day:

Who are the Morriss family? We are just a normal family with a dad who likes exploring the internet.Why don't you have more information? Because I'm not sure want I want to do with this site. I think there are no typos there. The idea was that I would share family news. Come back in January to see what my next post was.
Post a comment
Read more

February 04, 2020
4/1/2000 Things are moving We've had the letter from Wycliffe about "raising support".  They want us to aim that 25% of our income comes from other people by the end of a year, and 50% by the end of two years.  Other news: I've officially asked for voluntary redundancy Spoiler: after 4 years of trying I didn't even get to 20%, so I was paid a salary after all.
Post a comment
Read more