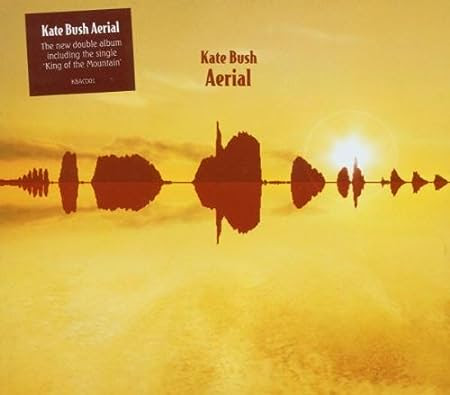 I was tagged by Simon Robinson to write about an album. I chose the one that is probably alphabetically first in my collection, and fortunately it was Aerial by Kate Bush.

So first of all, the provenance. (I think that's a great word. It's a bit like terroir - it's hard to define, but encompasses so many things.) During my teenage and twenties decades the bands I was interested in were mostly all-male: Genesis, Pink Floyd, Peter Gabriel, ELO, Queen etc. I don't really know why, maybe it was because I could relate to male singers more. Kate Bush was the exception to this pattern.

So in 2005 this album came along, the first in 12 years, and so it was a case the situation where you get interested in an artist and buy a few albums from their back catalogue, and then after a bit they release a new album. (You probably can't imagine, really can't imagine, how exciting it was when the new ELO album, Time, was released in 1981.)

On the Guardian Music Weekly podcast back in 2011 when she released Director's Cut they joked about how she dropped off her new album at the record company, "no I'm not going to tour - goodbye". (As it was  a while since I've listed to that podcast, feel free to listen to the podcast and transcribe it.)

So more of the provenance - when I listened to it. On Sunday afternoons I do the washing up and as there's nothing much good on the radio stations I listen to (Radios 1,2 and 4) I usually put on an album. I rarely listen to albums as I like listening to new stuff so I don't miss out on anything.

So - the tracks:
King of the Mountain - the one and only single off this album. OK.
π - people would say to her that should could sing the phone book and it would sound great, so she wrote a song where the chorus is the digits of Pi. Sounds much better than the phone book!
The next few are generally pretty good, and a couple of them cover domestic themes.

The second CD is the better. On the recent editions it's just called "An endless sky of honey", rather than the separate tracks being listed as on my copy. They really hold together and sound great. And it's here that my abilities as a music reviewer run out - just listen to it. One thing to note though, she tries, and succeeds in capturing the 5 note call of the wood pigeon in music. That's a sound which I personally find very evocative.

January 22, 2021
This is in response to Matt 's post Three feelings I don't have a word for .  (A blog post in response to a blog post. How quaint.) "Imagined vastness" sounds like a very specific instance of the more general "sense of wonder" or sensawunda . For me I get that feeling of imagined vastness when reading Iain M Banks' Culture series. I don't get the Stack Overflow vertigo he talks about, but I do have a feeling of holding something almost physical when I've got something on the clipboard and I haven't pasted it yet. It's similar to the feeling that I (maybe it is just me) get when I know there's a bit of coffee left at the bottom of the cup. Atemporal hotel lobbies is something I can't really relate to. I do have my own unnamed feeling though: Cycling to work It's that moment when I whizz down our sloped drive and start pedalling up to the road. Because I WFH I go out at lunchtime these days, and the feeling just isn't the sa
Post a comment
Read more