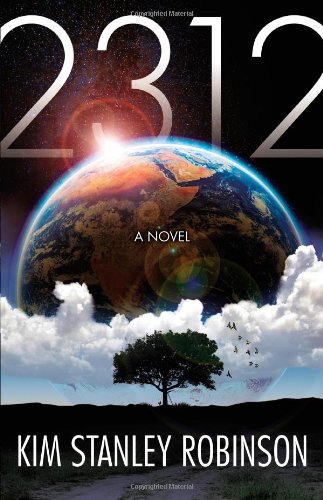 When I finish a book I'm always straight onto the next one, so I'm writing about this book having started it recently. It's 2312 by Kim Stanley Robinson. Here are some linked thoughts on it.

It's set two centuries into a future where the solar system is being colonised - planets, moons and asteroids. This is not a new theme, but I've read another book? about this recently so from that unrepresentative sample, it appears to be a popular topic. When I was younger happily read books about hyperspace and faster than light travel, and although I can't remember for sure, I probably assumed that someone would invent a way of doing it, or maybe I didn't care that it was actually impossible. Now that we're well into the 21st Century and physics has got pretty deep into the atom, and far back in time, it looks like nothing's going to happen on that front anytime soon. Travel to the nearest exoplanet is approaching feasible (conference on charlie stross's blog about this) but there are places to go nearer to home - planets, moons and asteroids. So it's an SF novel about a plausible future.

The plot also shares some similarities with another novel - Blue Remembered Earth - I've read recently, in that it's about the unravelling of a puzzle after someone dies by chasing round the solar system. I don't know if this is a coincidence or a new sub-sub-genre.

I saw Kim Stanley Robinson at a panel at Worldcon on "The Pleasures of a Good, Long Info-Dump". Cory Doctorow was also on the panel and asked him a lot of questions. It was interesting, but skewed the panel to mostly be about those two. He's one of those authors who I'd heard a lot about, possibly due to his Mars trilogy, but I've never read any of his books.This novel contains a few Info-dumps in interstitial chapters, showing his working on his world-building and filling in the history between now and when it's set.

I came across the word "spacer" in it, and it took me back to a song by Sheila B. Devotion with the same title. I remember being surprised when it came out in 1979. My experience of SF, apart from Star Wars and Close Encounters, was all in books so to hear a song about it was a genre-crossing experience. A couple of weeks ago I was listening to an Italo disco show by Ana Matronic and she played a song by Charlie called Spacer Woman, released in 1983. I've never heard of Italo disco, so there's a whole historical genre to explore.

Finally, for now, I came across this a couple of days ago - Habitasteroids. It riffs of the fact that in the books a number of asteroids have been hollowed out, or tented over, and contain human friendly habitats. It answers the question


If you wanted to start a colony with your friends on Twitter, which asteroid would you need?

When I ran it a couple of days ago the answer for me was Cambridge, and now it's Acapulco.