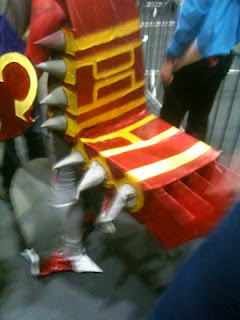 Last Saturday I went to Comicon. It was held in the same place as Worldcon, Excel in London, so it was interesting to compare the two. It was far, far busier (over an hour queue to get in), less well organised, the average age was a lot lower and mainly all about the companies selling stuff. I wouldn't say the latter is necessarily a bad thing, as it's a good way of small businesses selling their stuff, but if you're thinking of going it's worth knowing that. It mainly consists of two of the big halls full of stands. 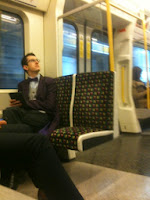 Even if you don't know much about it you may have heard about the costumes. I found that the most interesting thing about it. It started on the train at Amersham. There was someone with a purple jacket and bow tie. It could have just been his normal way of dressing, but the cyberman head fastened to his suitcase was a bit of a giveaway.

The photo at the top shows one I was extremely impressed with. Not only had this person made this elaborate Pokemon dragon type thingy made out of cardboard (maybe you can tell me what it was?), but they were queuing up with this awkward tail and would need to negotiate the crowded halls with it. I reckon about a fifth of all people there were in some sort of costume. It seemed like more, probably because they stood out more than the "normal" people. There were lots I didn't get, mainly the anime/manga ones. In my mind there was a hierarchy of costumes:

There was a stand for a Star Wars fan group, and they had what we called "professionals" as a short-cut for "really good costumes". They had R2-D2, sand troopers, tuscan raiders, storm troopers, clone troopers, imperial guards, Boba Fett and Darth Vader. They would walk around the show in their various groups, and attract lots of people wanting photos. I did a bit of research afterwards on the UK Garrison, and it seems like the costumes are hand made. You can't buy them online, because Lucasarts would clamp down on that. There are very detailed descriptions on the websites of the fan groups. Extremely impressive attention to detail.

The strapline is "the UK's No. 1 popular culture shows". It's "shows" because they aren't just in London, but in other cities too. So it's not just about comics, but also film, TV, games (video and tabletop) and YouTube. So there is merchandise associated with all sorts of popular media. For example, off the top of my head - Toy Story, Hunger Games, Sherlock and Breaking Bad, as well as the ones you might expect - Star Wars, Star Trek, Lord of the Rings and Game of Thrones. At Worldcon these sort of people were called "media fans". What I'd be interested to see is Nine Worlds, which seems to combine the best of both type events.

There were talks by people who were famous in areas I didn't recognise. One of my lads met TomSka, which may or not mean anything to you. I pointed out Robert Llewellyn to them and said "Red Dwarf". That reference went over their heads, so I said "Scrapheap Challenge", which did make sense, as when they were younger we'd watch it on Sunday evenings.

Some of the costumes that were particularly memorable: