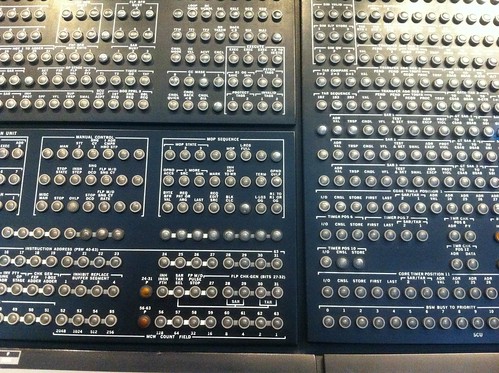 This is part of an IBM mainframe that I saw at the Science Museum in London. It's hard to imagine that anyone ever understood what they all meant. I think the reason there are so many lights is because there is so much to go wrong. The lights show when something's working, so no light means failure, or when something fails. These days the FLP BFR (flip buffer?) always does what it's supposed to, so we don't need to have a light for it.

I remember when modems had a full set of lights: TX, RX, DCD, DTR and so on. I also remember using them to try and work out why connections weren't being made. As they became smaller and sleeker they had just a couple of lights to show activity. Then they disappeared altogether.

We need lights for things we can't rely on. Once it's reliable the lights go away. Today I was re-reading the essay from Douglas Adams, "How to Stop Worrying and Learn to Love the Internet", written in 1999 (I wonder if that distinguished journalist still things the Internet is a fad). Quoting the computer scientist Bran Ferren he says, "Technology is stuff that doesn't work yet". Douglas illustrates this: "We no longer think of chairs as technology, we just think of them as chairs".  So my corollary to this is technology needs lights. Chairs don't need lights.