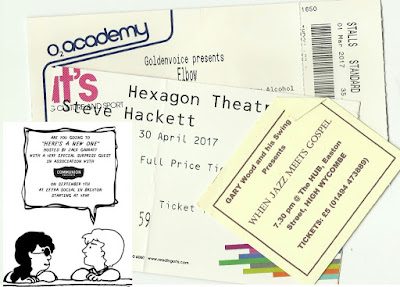 I don't often go to see gigs, but in 2017 I somehow went to several. I've put photos in to break up the text, but my phone's camera doesn't exactly excel in concert conditions. They started in...


February - Under Construction, the Bailey Sisters 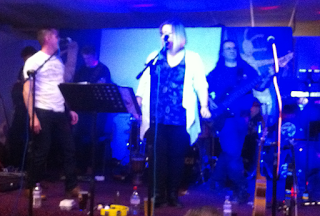 Under Construction is a covers band based in High Wycombe. One of my friends is the bassist and for his 50th birthday he got them to play for the party (and joined in on bass). They have two lead singers - one male and one female - and some very competent musicians. There's nothing quite like hearing some great songs from the 80s and 90s played live. His wife is in the folk band, The Bailey Sisters and they did a few songs too. Traditional folk isn't my cup of tea, but I enjoyed what they did. 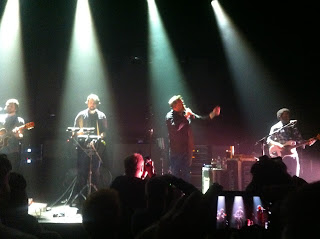 elbow is my favourite modern band. (Seeing as you didn't ask, my favourite non-modern band is Genesis and I was very glad to see them in 2007.) I bought their Mercury prize winning album "Seldom seen kid" when it came out and I've bought every album since. I went with one of my sons to the O2 Academy in Birmingham. We got there a bit early and by the time we'd go to the stage we were only about four people away from the stage. I think their latest album, Little Fictions, suffered from the departure of their drummer, as some songs just have a drum loop with not much variation. However they brought in a drummer for their tour, so that the older songs could be done properly. It was the 1st March and Guy made much of the fact that it was the first day of spring. I don't know what he'd chat about on any other day of the year. It was great to be able to hear their songs so loud and clear. Neat Little Rows, which sounds a bit muddy when you don't listen to it on a good hifi, particularly benefited from a live performance. As it felt like it was getting near the end of the show I had that feeling that you may have felt on the last full day of a holiday - that it's not long before all this will be over, and then it was. 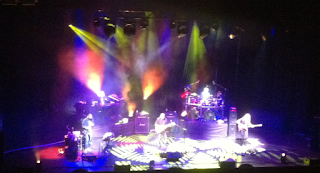 I was invited to see Steve by a colleague who'd seen him at Cropredy and really enjoyed his set. Unfortunately he was then invited to something else and decided to go to that, but was disappointed that it would mean missing out on the concert. I found another middle-aged prog fan to replace him, as well as the friend I went to see Genesis with. Steve left Genesis after Wind and Wuthering and by then already had released a solo album. He's continued releasing albums in a vaguely prog style since then, unlike the other band members. The first half was his solo work, including songs from his new album, The Night Siren. It's strayed from the prog roots to take in other musical influences. I'd listened to his solo work in the couple of weeks before the concert so that I wasn't hearing it for the very first time, and it was worth it, as I really enjoyed those songs. I went to hear Genesis songs, and this was an unexpected bonus.

The second half was early Genesis material, with Nad Sylvan singing. It seems obligatory to compare him to Peter Gabriel, and while he didn't sound like him, he had the range and style to be able to do justice to the songs. Apart from tribute bands, it's as close as you're going to get to Genesis these days.

This isn't a gig, but is worth mentioning, as this exhibition at the Victoria and Albert Museum had a lot of music in it. In fact, it had a lot of everything - guitars, equipment, video interviews, posters, programmes and other memorabilia. It was incredibly crowded but I was able to take pretty much everything in. One revelation was that there was whole album - Animals - that I wasn't aware of. I knew of the flying pig, but I hadn't really linked it to the fact that it was part of an album release. At the end there is a room with nothing in there but carpet to sit on and projections on all four walls. We came in during Comfortably Numb and then it started again with Arnold Layne. I wondered if they'd do songs from all the albums in between, but in fact those were the only two songs they played. It was quite an experience being immersed in all those sights and sounds.

I don't know how much Jack Garrett is known, because my children introduced me to him, though he was BBC Introducing artist of the year for 2015. Like James Cordon, he is from around the High Wycombe area. One of my sons bought a pair of tickets when he spotted that their was going to be a intimate gig, with just 100 tickets available. It was held at the Effra Social in Brixton. Apart from someone who was presumably Jack's Dad (I saw a place at one of the tables reserved for him) everyone else was in their 20s, so I stood out a bit. He'd had two years off music and had spent the previous couple of months writing new material, which he was trying out with us. He was really nervous about performing new songs, but he wanted to play them in front of people. He said he had hundreds of chords and phrases and some verses and choruses knocking around and was waiting for them to come together into songs.

After a couple of songs he let Rae Morris play a couple of her songs, and then they chatted between them, a bit like each interviewing the other. After a while they each played some more of their own songs. She had recently released a track from an upcoming album, so she was in a different place in her cycle of writing and releasing. I've subsequently heard her on the Radio 1 Live Lounge, so her career's doing well. It was really interesting to hear them talk to each other about their music and performing - nothing like I've really seen before.

Our church ran an event called "When Jazz meets gospel". Gary Wood brought his band and showed us the roots that jazz had in gospel music. It was a mixture of slides and chat, and playing the songs he was talking about. During the afternoon before the concert he invited people to come and jam with the band. There were only four of us - two saxophonists, a drummer, and I played the piano. I'm able to do some improvisation in C major or C minor and this really stretched me as there were all sorts of chords for me to play along to. After a bit of 12 bars blues warm up we played three different songs, and then Gary chose one of them - All of You - for us to play in the evening. I've hardly played piano at all recently, and never with a band, so as well as the chords I had a lot to learn about counting bars, reading music and keeping an eye on the band leader, and even starting off properly. I think I did OK on the night, though there were some parts I'd played better in practise. I'm glad I managed to play all the right notes, though not necessarily in the right order.