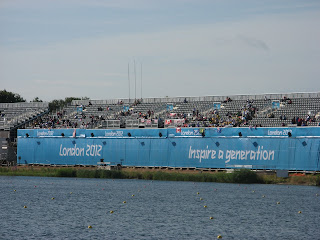 I thought it was one of the best things I'd seen. If the rest of the family hadn't been so entranced too they would have probably told me to stop saying wow all the time. I thought the highlight was when the fifth ring rose up and joined the others. Danny Boyle really pulled off a great show. When he took over after the previous person gave up there was some cynicism about whether he'd be able to do something memorable, but I think he confounded those critics.

When I was a teenager my favourite album was Tubular Bells, so I was very pleased to see Mike Oldfield given the stage. It was also good to see a geek - Tim Berners-Lee, get recognition too. The way the prerecorded video was linked in the live stuff worked really well for a TV audience. I liked the music so much I bought the album.

Russell Davies wrote a really interesting post about it:


I saw a generation realising that it was now Top at Culture. 30/40 somethings were suddenly seeing the stuff they liked, that they grew up with, was now the dominant cultural stuff. Their favourite things are now 'officially' mainstream, dominant culture.

It was a very long walk to get to the standing area (why do people sit in the "stands"?) but once we got there and the event started the time was filled with racing and then the on-site "TV" show. Food and drink was supposed to be reasonable, but the prices of the Coca-Cola company's products was higher than I've seen anywhere. I hope the extra money they took in went to cover costs and not to Coca-Cola.

The match (Gabon vs Korea) wasn't that exciting - the final result being a nil-nil draw. It was a good chance to go to Wembley for the first time and experience the atmosphere. The crowd control at the end was quite impressive as we shuffled towards the train station. It never felt too crowded.

Overall the whole thing seems to have been really well organised. Many companies struggle to deliver a good "customer experience" but I think the Olympics had a few advantages over normal companies:

We were on holiday for the whole fortnight, a week of it away from home, so there was no way of seeing if the exuberance and enthusiasm portrayed by the BBC was shared by everyone. A relative of my boss, Luke Arthur, wrote in the Huffington Post and described it as, "My generation's most pivotal cultural moment since 9/11".