Brian Eno goes on the internet 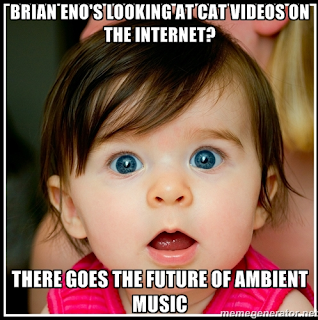 Insert discussion of the original meaning of the word meme and what it now means here.

Memes are supposed to be understood by lots of people without explanation. This one fails.

I've been visiting Universities with one of my sons, looking at their Music Tech courses. (Insert link to blog post about thoughts on that when it's written.) At Portsmouth they had an analogue mixing desk that used to be used by Coldplay. The guy showing us round made some disparaging remark about their music. I wish I'd been quicker off the mark and asked, "Couldn't even Brian Eno" have saved them. For Brian has breathed on music by U2 and Coldplay and probably other people and made it more shiny.

There was a BBC documentary a few years ago about him and I remember a bit from it where he said that he doesn't go on the internet as he would find it too distracting. I can't remember the exact words, but it was along the lines that it would ruin his creativity.


Picture from Joe Plocki and put through memegenerator.net.