December 27, 2018
While 2018 is not quite over, I think we've had enough of the year that I can announce my personal awards. Starting with...


Best TV series based on a number of short SF stories

This was a real treat. A number of Philip K Dick's short stories were turned into hour long TV programmes. This doesn't happen often, maybe because it's expensive to create one-off sets and do casting for anything less than a complete series, but kudos to Sony for doing that with this series. Philip K Dick wrote the stories that the films Minority Report and Total Recall are based on, so you can guess what sort of subjects are covered. Some are set in the future, or on other planets, while others are set around now. Given that they were written decades ago some are very prescient.

The title sequence for this series also deserves an Honourable Mention for the next award:

The third series of Lucky Man came out this year on ITV. Although titled Stan Lee's Lucky Man the writing is done by a number of writers. The sequence is in a comic book style, with some shots of London which makes it looks as photogenic as in the recent Bond films. The song over the pictures is by Corinne Bailie Rae and fits it perfectly.


There's also an Honourable Mention for Vanity Fair, an ITV adaptation of the book. The song is a modern one, and most episodes ended with a modern song too. I'm sure all adaptions incorporate elements that people expect, so with this series we have the main character, Becky, looking at the camera every so often. So it seems appropriate that a little bit of modern music makes it into the programme. Michael Palin is brilliant as the voice of the author.

(This is not a kid's programme.) The VR/game is called Azana and we follow Leila as she meets another player, Tess IRL. They both get involved in a group within the game called Red Pill and it gets very dark and strange.

Although though this is very very dark, there are enough glimpses of hope to keep you watching. It also is very very slow, which is not a bad thing. You'd have to watch it to know what I mean, but when June clicks a pen, and that is a major turning point - that's slow drama at it's best.

Even though adverts are a necessary evil, there are some that are so engaging that they somehow are acceptable. This one from Nationwide (which is after all a mutual society, so no shareholders) is my favourite:

What? I hear you saying. These were supposed to be TV awards and here's a dessert suddenly. Well, they're my awards so I'm throwing in what I like. 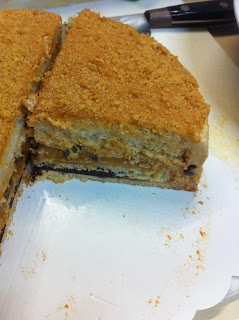 It has a pastry base, layers of sponge, mousse and chocolate and a crumb top. It's like several desserts in one and isn't heavy and stodgy.

This is a tricky one. Let's line them up side by side in order, best to worst.


It has to be Celebrations really.

Although I also read and enjoy (Honourable mention:) Charlie Stross's diary, John's had a 20 year blogiversary he wrote a month of retrospective posts on top of his normal output. Next year is my 20 year blogoverary so I'll be doing the same.

I discovered this a couple of years ago. Although I grew up in Lincolnshire, with it's own plum loaf, this is my favourite sweet bread to eat at Christmas. It has a very subtle flavour and once it gets a few days old, toasts up really well. 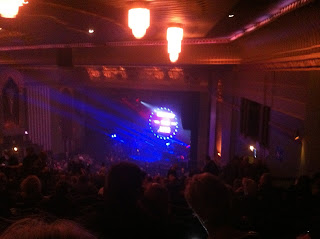 I went to more concerts in 2017, but only a couple this year. Pink Floyd are one of my favourite old artists (also: Genesis, Yes, Kate Bush). I've seen those three, but this is probably as near as I'll get to PF. Although they're very fine copiers (I thought I heard one of the mistakes that David Gilmour made on Shine On faithfully reproduced) they also add their own twist with original Aussie-themed graphics, and at one point emerging from the smoke, a giant kangaroo.

I think it survived the move to Channel 4 quite well, and the well tried format of eliminating someone each week still delivers.

I expect the books have more subtleties, but what survives through to the TV programmes is a crime drama that I actually look forward to watching. Plus also an honourable mention for:

Pam and Jim in the (US) Office

I'm a bit late to the party with this one. In fact the party's over, the hosts have moved out, some new people have come in, and they've added a conservatory. The US Office made it to Comedy Central so I was able to watch more episodes in addition to the couple I caught on a plane.

Also, Honourable Mention for Mal and Anara in Firefly/Serenity, which I finally saw this year (though I'd seen the film once).