When I heard a track from Trevor Horn's Reimagines the Eighties on Radio 2 I thought it was worth seeing if the other tracks were as good, and many of them were.

The first track, Everyone wants to rule the world, sung by Robbie Williams, was released as a single, and doesn't depart too much from the original.

The second track, Dancing in the dark, sung by Gabrielle Apin, is a slowed down version of the original. The leisurely tempo and string arrangement really enhances Bruce's words.

Seal sings Ashes to Ashes and his powerful range manages to competently handle the melody that David Bowie wrote.

There are other slowed down tracks: Slave to the Rhythm and Take on me, and they manage to not be a cheap trick too often repeated, because the songs can stand the scrutiny the stretching out brings.

Two more tracks are worth mentioning: Owner of a lonely heart is sung by Trevor himself, originally by Yes, but not when Trevor was the singer. Blue Monday starts with electronic drums and orchestra, but then blue harmonic and synths kick in towards the end.

Not the best author who happens to be on Twitter, but the person who is an author and is on Twitter, and is the most interesting. This is shared jointly by Amy Liptrot (who wrote The Outrun) for tweets about wild swimming like this:

and Tom Mitchell who wrote HOW TO ROB A BANK (I think the capitals are important for some reason) for comedy gold like this:

Not calling this book ‘Snakes On A Plain’ was a missed opportunity. pic.twitter.com/mSP7lesDJk
— Tom Mitchell (@cakesthebrain) December 27, 2019


Best unfinished classic literature finished off and made for TV

This goes to Sanditon on ITV. When classic literature is adapted for TV there's always a bit of emphasising the themes that are important to us these days. When you get a chance to finish it off you get the gravitas of the original classic, plus the opportunity to make something that we love these days. So none of the good people are racist, and it's a bit more steamy than a book would have been. I loved the series and got drawn into a bit of fanfiction and tumblr.

Yes, it's not Harry Potter, but His Dark Materials, which was made by the BBC and HBO. Thanks to a decent budget and a great team of actors and writers this is a serious contender for my favourite TV ever (currently occupied by Life on Mars). It's been a while since I read the books, but I think they kept fairly faithful to the books, which unfortunately means that Roger still gets kidnapped. I guess we have to have all the original darkness, or it wouldn't be the story that it is. I forget details of what I've read, so much of it was an unfolding of the plot, and I didn't usually know what was coming up next.

Best TV series based on a novel written by two authors

Good Omens by Terry Pratchett and Neil Gaiman. Again, big budget (Amazon) and a great team, plus Neil himself as showrunner made this a serious contender for my second favourite TV series ever. 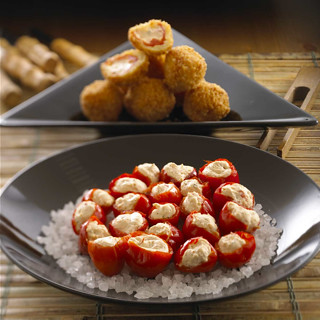 "Photo of Stuffed Peppadew Peppers" by Foodista is licensed under CC BY 2.0

Well new to me anyway. Peppadew peppers stuffed with cheese - #yum. I first ate it over Christmas 2018, but that was after last year's awards, so it get included in these ones.

When I first saw this I kept on saying "wow". It blew me away. It's not the most watched video on YouTube, so maybe it's just me. See what you think.

Burritos. I don't know why putting tasty food in a wrap makes it even tastier, but it does.