March 13, 2020
Disclaimer: I'm am not a journalist. I didn't record this gig because we were asked not to. My memories of what Jack said may be imperfect, but hopefully I've captured the gist. 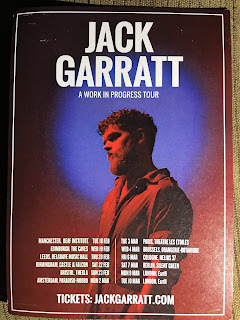 Jack Garrett has made a comeback recently. (He mused at the gig as to how long it is before when you do something you're making a comeback.) He appeared on Annie Mac's show on Radio 1, on Zane Lowe's show on Apple Music and a third. He's releasing his second album, Love, Death & Dancing on 29 May, but in the meantime he's released a few tracks from it as Volume 1. I saw him at EartHackney on Monday, 9 March. He played a small gig in 2017 at Effra social and I was fortunate enough to be one of the 100 people there. I reviewed it in Gigs of 2017. All the tracks he previewed there he's since thrown away. There were about 600 people there this time.

After an opening track (I forget the title) he talked very honestly about his struggles over the past four years. He won both the Critics Choice award at the 2016 Brits, and the BBC Sound of 2016 poll, an achievement only matched by a few others: Sam Smith, Ellie Goulding and Adele. He said this put him in a corner. He talked about a negative voice in his head and how counselling had helped him with that. He played a new track, "Help Doctor" after that.

He described the silence that came after touring and particularly a time towards the end of 2016 when he was in New York with his wife. There was a song with a title something about Death that was related to this. He told the story about Buddah and a demon call Mara before he played the song of the same name. Worry was one of the tracks from his first album that he played, plus another one, I forget which.

There was a lot of love from the audience and he genuinely seemed bowled over by it. He wasn't sure if people would come to the gigs. I think he's too niche to be as popular as Adele, but he has so much talent his following will grow.

His technical equipment was interesting, for those into that sort of thing. He had a U shaped setup with an electric piano on the right, a synth on the left, with what looked like a MiniMoog above it, with a vocoder next to it. At the back of the U were various bits of audio equipment and on the floor a pedal setup, plus a pedal keyboard (those things that pipe organs have on the floor). At one point he started a drum rhythm in the middle of a song, but it was the wrong one, and he had to start again, but apart from that it was technically flawless. He is incredibly competent with the keyboard and guitar, but then so are a lot of other people. What makes him different is his originality.

Towards the end he dedicated a song to a friend of his, "he's the tallest person I know, but even if he weren't tall he would be tall to me", who had been involved in an abusive relationship.

At the end he said he'd like to do a meet and greet, but for understandable reasons couldn't. (Note for future historians: Coronavirus time), and then he was gone. 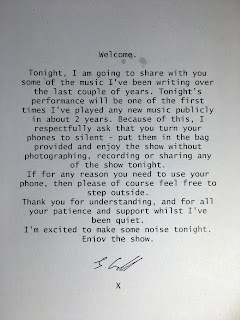